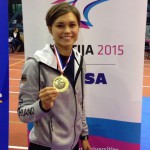 Marilena Werth is a 23 year old young energetic competitor of the championship. She brought her smile and happiness to our event. In a short interview we talked with her about the competition and her background in Taekwondo.

Q: Please give us a short introduction about you and your Taekwondo carrier
A: I have been into taekwondo for 16 years now. The last years were quite successful for me. I won two bronze medals at the Belgian and Greece open and a silver in Moldova Open. This year I got the chance to take part in the Universiade in Gwangju and I won a silver medal at our National Championship in Germany. But my biggest success so far is the gold medal that I won here in Opatija.

Q: What do you think about the event, how did you like it?
A: To be honest, I was pretty sceptical with the new rules, that everyone had to fight with everyone, but it ended up quite well. I think it is a very fair system that gives everyone the chance to get into the court more times. Sometimes the draw can be really unlucky in the other fighting system. I especially liked Opatija and the sightseeing program. We could get to know each other better and the city was just wonderful. The only suggestion that I would make for future is to have more opportunities to get to the venue from the Hotel. 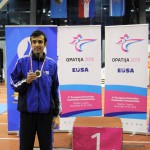 Meisam Rafiei father of a 2, 5 year old child represented Iceland this weekend. He was willing to discuss with us his previous background in Taekwondo and his opinion about the event.

Q: Please give us a short introduction about you and your Taekwondo carrier.
A: I’m 29 year years old, father, studying Sports Sciences in the 2nd year at University of Reykjavik. I started to train taekwondo at the age of 3 competing since I’m 7 years old. Originally I’m from Iran but now I am representing the National Team of Iceland. My results from last year are bronze medal at Trelleborg Open in Sweden, gold medal at Nordic Championship in Iceland and I could also compete in European Championship in Baku. When I was young I was World Junior Champion in 2002, and World Military Champion in 2006 and 2008. Right now I’m preparing for Rio. Apart from being an athlete I also work as a head coach in FRAM and I’m helping to coach KR and Armann. From 2011-2014 I could be the head coach of Iceland’s National Team.

Q: Where have you heard about the 4th European Universities Taekwondo Championship?
A: Well my University did not know about the competition, neither promote it, but I saw online at my friends’ pages that they will participate in the event. So I was thinking of why not to come. I have never been to these competition series before and as I’m 29, I would not have that many possibility to take part in, because of the age limit.

Q: What do you think about the event, we’ve heard that you arrived without a coach, how was it?
A: Yes you are right, my coach left after the Croatian Open. Now they were texting me from Paris Open to come, but as I was in the semi-finals and finals I would not be able to arrive there in time. It was a little bit hard because I only knew a few people here, but now I have a lot of friends. I would like to especially say thank to the kindness of Gerhard Huber the coach of the Austrian team who helped me during the fights. About the event, to be honest I thought I will be much easier, but indeed it was surprisingly hard at the end. I would also like to say thanks for the organizing committee and volunteers to the cheerful attitude and kindness. I had been to several competitions before, but here there was always a smile and a friendly environment which made me feel warm. In general I liked the system and Adidas KP&P as sponsor all in all I have positive experience with the competition.

Thank you for participating in our event and to let us have this short interview. We wish you a good luck for the following years!

The participants were welcomed and wished to have a great competition where they can test their skills and abilities. The Organizing Committee will make sure that the event will run smoothly without any problems.